Here is the full list of online calculators for a myriad of engineering and related applications: 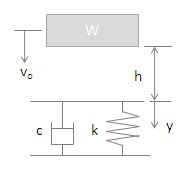 This is the same drop shock calculator given in the 4/28/2014 posting.  However, via javascript an animation feature has been added.  Simply click the button to view the drop.  This should work in all browsers except for IE 8 and earlier.

If the calculator has not been run for a few minutes the animation may not execute.  To do so simply refresh the page.

A limited number of time steps are used in the solution.  For large drop heights, low damping and stiff springs the drop response will be multiple low damped bounces and the animation will likely stop during a mid bounce.  For smaller drop heights, moderate to high damping (>10%) and soft springs (fn < 10-20 Hz) the drop response will be one to a few rebounds and the animation will likely stop at the static deflection of W/k.

This is the second in a series of shock response online calculators.  The calculator below or here will determine the shock response to a dropped weight.  The spring and damper are mass-less and, therefore, the results are valid for both the case of 1) the spring/damper attached to the bottom of the weight and dropped onto a hard surface and 2) the rigid weight dropped onto the spring/damper.  This version is limited to one vertical degree of freedom.

Several response cycles are charted.  The charted response is limited to the pre-coded number of time steps which is dependent on the drop height and natural time period.  A caution note is activated if the limit is exceeded.  The results are still valid with the caution but the time response will have fewer than the normally charted number of response cycles.

The calculation does not require that the weight adheres to the spring/damper at impact and beyond and therefore can "bounce."

Any consistent set of dimensional units can be used that is consistent with Hz and seconds.

For no damping the the maximum displacement will match the theoretical value to within 1% where W/k=Δ2/2(h+Δ).

Here is an online calculator for the theoretical shock response to a base input.  It has pre-coded options for 1/2 sine, triangular, rectangular and saw-tooth pulses where peak amplitude in g's and time pulse in seconds are input.  It also has an option for a user input spectrum with up to 20 time points. The suspended system includes the suspended weight on a linear spring (k) and viscous damper (c).  A gravitational constant is also needed.  Any consistent set of units with seconds and cycles per second (Hz)are required.

Some baseline cases where the analytical solution is known.

This active web form can be used to calculate the first 2 modes of a general beam configuration.  Up to 24 different beam segments can be used with each having different section and area properties including weight density.  Concentrated weights can also be added.  Boundaries include free, simple support and fixed slope.  Both vertical and rotational springs can also be used.

Output includes the first 2 mode frequencies in Hz and the respective mode shapes.  A gravitational constant must be defined.  All dimensional units must be consistent with each other and Hz.

Simply change or add values to any of the white cells and the frequencies are automatically updated.


The following screenshot is a more complex configuration and with all of the features used.

This is an expanded Beam Analysis version from an earlier posting.  This version has up to 24 segments available each with its own section properties and elastic modulus.  Available loads include concentrated vertical and moments.  Vertical and rotational springs are also available.  Boundary conditions include simple, slope and fixed.  Each can be "0" or specific values can be used.  Charts of results include displacement, moment, shear and top and bottom fiber stresses.  Maximum and minimum stresses and deflections are listed.

The following embedded Excel form is live.  Any "white" cell can be changed and the results are updated immediately.

Updated: 3/14/2014 at 12:22 EST.  We found that some of the worksheet tabs had the entire sheet protection activated which made the entire sheet non-editable.  An undated version with all the tabs editable is available from the same link given below.  Apologies for any inconvenience.

The attached Excel spreadsheet is an extension of previously posted beam calculators on this blog and XL4Sim.  This one has two significant improved differences:


1.  Rather than using the VBA module to do the beam calculations they are done directly via worksheet formulas.  This enables "instant" updates as changes are made to the input cells.  This makes scenario projects very fast. The cell formulas are on the same worksheet as the input cell sheet and, therefore, the sheet can be copied as many times as needed without loss of functionality.  Multiple workbooks can also be made.

2.  A VBA macro option is available on the worksheet that will "optimize" the beam configuration given a user list of available beam sections defined by area moment area of inertia and corresponding section moduli (top and bottom). The optimizer will find the combination of given beam sections optimized to the user defined maximum stress using the smallest sections. The ideal optimum is where all the beam segments are at the maximum allowable stress which will usually correspond to the lowest weight and many times the lowest cost.  The algorithm will consider the sections given by the user and will not become trapped in a local minimum.

It takes ~ 1-2 minutes to complete if the largest number of beam segments (24) and user input sections (21) are used.

Up to 24 beam segments can be used with each having different section properties.  For the optimizer the user can input up to 21 different sections to be considered.  The only restrictions are: 1) they be input from smallest area moment of inertia to largest and 2) the largest section, if used for the entire beam, will result in the maximum stress <= the target stress.  The program will provide caution messages for each condition.  In some cases the program will find sections that can be smaller than the ones the user has provided.  These will show up as being stressed less than the allowable.  The worksheet charts update after each cycle so you can watch as the optimization proceeds.

Available boundary conditions include simple-support with a given displacement value, fixed slope with a given value, and fixed displacement/slope.  Translational and rotational springs are also available.  Loads include concentrated forces and moments.  Moment, shear, stress and deflection charts are given.  The calculations are dimension neutral but they must be consistent.

As an aside,  the built-in Excel Solver optimizer can be used but it is not very practical for this type of application because it gets too easily trapped in local minimums and can not easily handle discrete changes to the variables.  The algorithm used in this spreadsheet is a guided descent approach which takes advantage of the known properties of the domain.

The spreadsheet download has several examples of trial cases (one per worksheet) that can be used as examples.  The VBA module and cell formulas in Range A150:DC700 are password protected to protect them from being broken or inadvertently overwritten.  The VBA module has been 3rd party code signed (Thawte) to help with the Excel security settings.  The VBA module is also date limited for 6 months.  See this blog or www.xl4sim.com for future updates.

Here are two examples.  The first, is a fix-ended beam with a center load but the section moduli of the bottom fiber is 1/2 the upper fiber.  The second is a bit more complex with an end moment, two vertical loads, a vertical spring, a fixed end and mid-span simple support. Note for each the optimizer tries to find a combination where each beam segment is close to the allowable stress which in these cases is 24ksi.  They won't quite reach the allowable stress because of the discrete sections.

Another potentially valuable feature is once the "optimum" is found the user can manually change any of the beam parameters and get an "instant" result for additional "what ifs".